Microsoft has shared an updated road map for its Business Applications including Dynamics 365. This covers the next major cloud update that will roll out between October 2018 and March 2019.

In line with its revised release cadence, all Dynamics 365 Online users will now be on the same version so this update will need to be scheduled and cannot be skipped.

In a document spanning 238 pages a single post can't do justice to the breadth of content across all Dynamics 365 apps and the Power platform (PowerApps, MS Flow and Common Data Service). In this post we'll begin by looking at some of the new functions coming soon to the Dynamics 365 for Sales app.

As with any pre-release information, these points are subject to change and it is important to note that many of the new functions we've highlighed will initially be released as a public preview.

With organisations increasingly using Microsoft Teams to support their internal communications, new functionality will enable any Dynamics 365 record to be connected to a Teams channel.

Using Teams helps everyone working on a deal collaborate, wherever they work. Using the new integration it will be possible for individual opportunities to be pinned to a Team associated with the prospective deal.

Users of Microsoft Teams, even if they aren't Dynamics users, will be able to access the main detail on these records without leaving the Teams interface - a good demonstration of the responsive Unified Interface which adapts the Dynamics 365 record display to fit the Teams UI.

Teams functions will be accessible from the Dynamics UI, and in turn Dynamics features can be used within the Teams interface, subject to restrictions based on access control.

We understand this new integration will enable Teams users to make basic edits to records within this interface. Again using the example of a sales opportunity, this could involve changing the estimated close date, creating a post or updating the opportunity value. Dynamics 365 users will also be able to directly open the pinned record to get the full user experience.

In addition to sharing files and content in one location, users will be able to engage in chat sessions across Dynamics 365 and Teams to help advance these deals. Within the Dynamic UI, users can review pinned chats that are contextual to each connected Team.

Longer term, Microsoft plans to introduce a new control enabling new Teams to be automatically created from a Dynamics 365 opportunity.

The Unified Client Interface (UCI) was introduced in v9. This uses responsive design principles to provide a uniform interface across any screen size, device, form or browser.

New Dynamics deployments now default to UCI and with effect from the October release this will be the only option when creating a new app module.

However, for most Dynamics v9 users, the Unified Interface is currently hidden behind the curtain. That's because upon upgrading to v9, the UCI had several important gaps with legacy functions so as a result most sites upgraded to v9 using a refreshed web UI rather than enabling the new experience.

These gaps are closing thanks to Microsoft's continual background updates and further Unified Interface performance improvements that are promised for this upcoming release.

At organisation level, admins will be able to enable or disable functions within the Unified Interface that include: bulk edits, advanced find, merge records, share records and run on-demand workflows. These cover major omissions in earlier v9 release.

Crucially, Microsoft says  the October update will include a series of new new functions across all D365 business applications that will only be available within the Unified experience.

With the prospect of the Unified Interface reaching parity with the legacy web UI by the time of the October update, and potentially eclipsing it, administrators are urged to start learning about the new experience.

The classic web UI will remain available in the October update but Microsoft will look to shut this off at some future point...READ MORE

In v9 and earlier releases, guided process flows only supported legacy attribute types such as option-sets, look-up fields and text.

Utilising new Common Data Service for Apps, interactive controls can now be added to process flows (for both Unified Interface and the classic web UI) which can include sliders, switches, radial knobs and LinkedIn integration...

The upcoming release sees the addition of more LinkedIn Sales Navigator controls. For the first time these controls will be customisable and can be added within the context of guided process flows using the Unified Interface.

For example, within the initial stage of a lead or opportunity record this could highlight potential icebreakers and conversation starters for connection requests by identifying shared groups and other similarities.

At each stage within Dynamics 365 guided processes, controls can be configured to show insights from LinkedIn about individual contacts and companies, as well as recommendations to target similar people.

This includes Teamlink that will leverage your organisation's LinkedIn network to identify colleague who may be able to facilitate an introduction.

New functionality will enable sales teams to trigger a series of repeatable processes and actions in the event of a defined scenario occurring.

The preview guide uses the example of a customised Playbook that would cover the actions to be taken in the event that the main decision maker leaves an organisation while an opportunity is in progress.

Playbooks will be configurable to provide contingency planning and guidance across potential sales situations. Once triggered, these will prompt users to follow defined steps. Using the above example, the aim would be to keep the deal in play by identifying and reaching out to a new contact so Playbook steps would cover the necessary actions to make this happen.

In another scenario, a Playbook could be configured to help account managers take proactive steps in the event that one of their customers was acquired...READ MORE

A new dedicated AI for Sales app will released as add-on for the Sales Enterprise licence.

Drawing on data from Dynamics 365, this provides out-of-the-box prescriptive insights to help managers assess performance across their team and take proactive action. This will include public previews of call intelligence and performance analytics.

With a pre-built home page, Microsoft says this is designed to quickly answer frequent sales management questions by highlighting important events and suggesting action points which can be implemented within this interface.

The app reflects the new predictive lead scoring feature as well as relationship heath scores for an on-demand assessments.

Further capabilities within AI for sales for seller include the following. However, these features will be rolled out on regional basis to Azure data centre so there may be some delay before these are available in the UK:

To help sales professionals start new discussions with contacts they haven't recently been in touch with, or never previously met, this new icebreaker function will prompt conversation starters.

To help sellers build rapport, embedded AI scans attached emails and other communications to identify and promote important detail about a contact which could be used as a conversation starter. Potential examples as cited as being detail referencing family, sports and holidays.

Contextual prompts will suggest users create new records and based on the notes entered.

For example, when meeting notes, or phone call summaries, are entered, contextual on-screen recommendations would appear. For example, these may recommend scheduling a follow up meeting or a reminder task to reduce user effort in creating these items.

Also, for the first time, Microsoft are planning to enable users to speak notes directly into Dynamics from their phone but we are getting ahead of ourselves as that won't be seen just yet...

Connection Insights / Who Knows Whom

Discover which people in your organisation are already interacting with a prospect based on Office 365 activities.

In contrast to the embedded LinkedIn TeamLink feature, this feature within the AI for Sales appuses Microsoft Exchange to find people within the user's organisation who've communicated with a contact based on previous email messages.

This highlights any colleagues who might be able to facilitate an introduction and includes indication of the strength of this relationship. 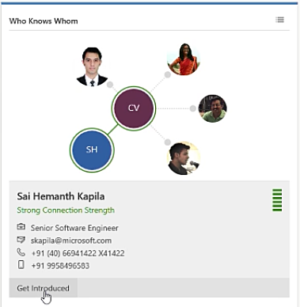 In preview for some time, Relationship Analytics enters general release within the AI for Sales app.

Designed to help sales teams manage their opportunities by providing a health check on their pipeline, Relationship Analytics highlights the deals that require attention.

Currently, this uses engagement data from Dynamics and Exchange Online to highlight trends in the relationship health. This criteria includes recency of contact and any use of keywords in emails that suggest positive or negative sentiment.  These sources will be extended to include LinkedIn InMail in an upcoming public preview.

A new machine learning predictive scoring mechanism will score leads on their likelihood of becoming an opportunity.

Out-of-the-box, this learning model will reference related entities including contacts and accounts, as well as unique lead attributes, to report a predictive score.

To ensure meaningful lead scores, sales teams will be able to customise and tune this model by selecting or disabling signals that contribute to this rating. Microsoft has yet to release information about these available sources but the main aim will be to provide users with extra insight to focus on the prospects that are most likely to convert.

In addition to widespread improvements that are promised for the Unified Interface, this update reflects Microsoft ongoing investment to embed more AI capabilities as the product evolves from principally being a tool for sales force automation to one increasingly for sales empowerment.

We'll share more information as these sales features become available but in our next post we'll take a look at what's new in the Customer Service app.

Please complete the form below and we will be in touch, book a call with one of our consultants or phone us now.