How to Check The Quality of Your Email Marketing Lists 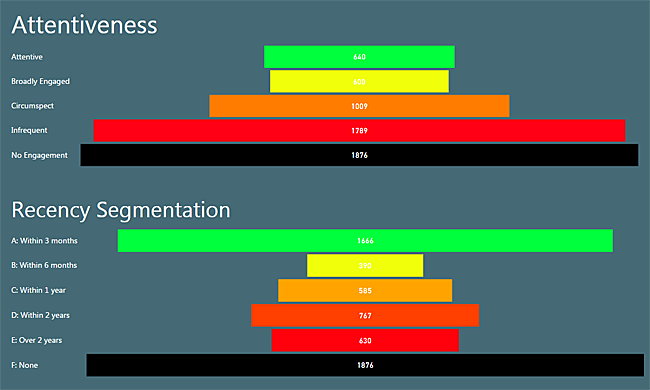 How many email addresses in your marketing lists never respond to your messages?

With many email marketing services priced based on how many messages are sent these, having numerous recipients who never even open your emails could result in paying additional cost for email send capacity that isn't needed.

Repeatedly including email addresses in campaigns where no recent action has resulted will hit campaign metrics. Open rates will especially suffer if mailing lists include a significant segment of email addresses that are repeatedly non-responsive.

With the arrival of GDPR in May 2018 and its requirement for specific, unambiguous opt-in this is a segment of contacts that needs attention, either to drive (re)engagement, or to remove these addresses from further campaigns.

Identifying these contacts is crucial and CRM is the starting point.

How to Report Email Action Recency

By connecting Microsoft Dynamics 365 with ClickDimensions, dotmailer, or another integrated email marketing solution, each action will be tracked and reported from every email campaign.

This data can be used to identify which contacts aren’t responding to recent emails. Marketing teams can then take the appropriate action to remove them from mailing lists, or focus on getting these individuals to opt-in for future communications.

The example below shows a ClickDimensions email send record from a recent campaign where no action has occurred. The message has been delivered with no bounce or unsubscribe reported but no click or open actions have been tracked. 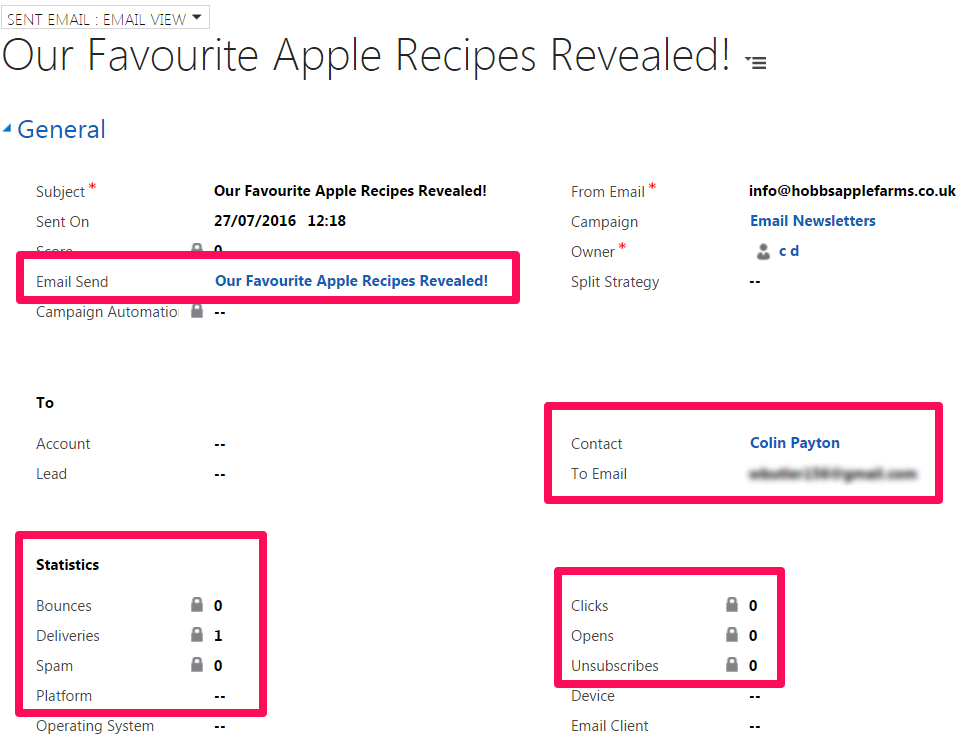 No action taken by a contact in response to one marketing email in isolation isn't a major concern. However, in the example shown below, the history of email sends tracked by dotmailer and reported in Dynamics 365 no recent email actions have resulted from another contact for well over 6 months: 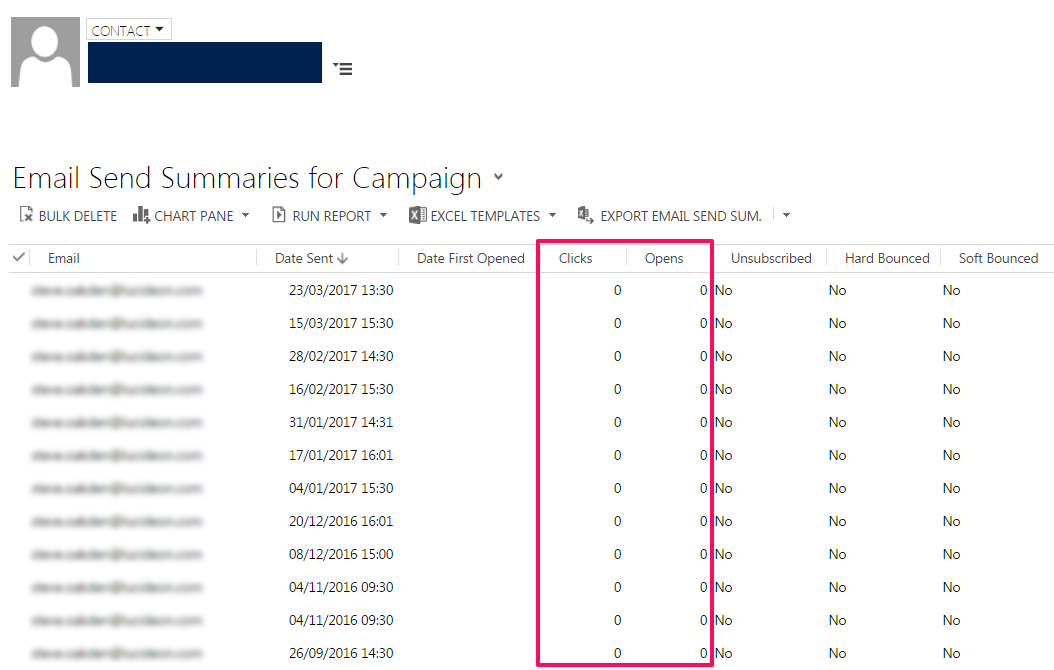 In this scenario, a repeated lack of action should be a prompt for attention.

Continuing to include non-responsive emails such as this will drag down campaign open rates. This is one additional marketing email that doesn't need to be sent and it suggests that the recipient has not opted in which would result in non-compliance with the GDPR.

This is just one contact and email address in isolation but how many similar examples are there in your marketing lists?

One method of identifying non-responsive email recipients is to use a series of roll-up and calculated fields that query tracked email campaign data.

On this contact form, 4 automated fields have been configured that display the recency of email actions:

Each open or click action in response to email campaign is defined as a imprint.

In this example, the last email imprint is dated 24 March 2017 and the recency age of this imprint is just 3 days.

The recipient is engaging with the material so all is well. Whether this individual has opted in to the mailing list and this is GDPR compliant will be another consideration but beyond the scope of this post.

This looks at the recency of email data one contact record in isolation. The next step will be to use this data to find contacts in the database where no imprint has been tracked over many months.

Using these fields there are a selection of queries that could be applied.

Firstly, to find any contacts included in recent email campaigns where the last email imprint date was more than 6 months ago: 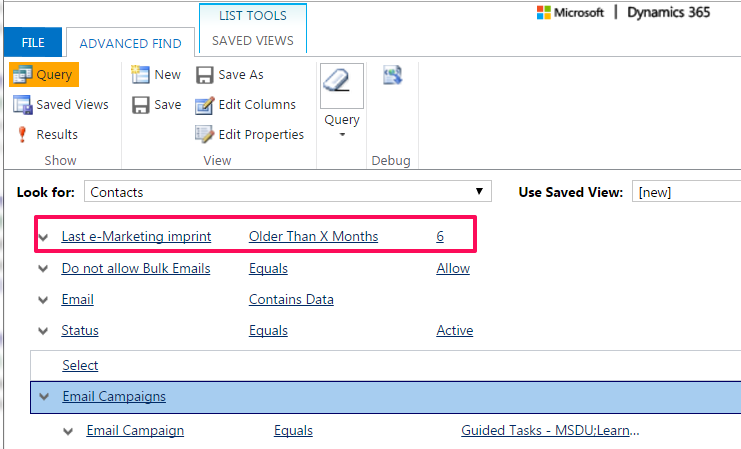 Or, find contacts that were sent previous email campaigns where no imprints have ever been tracked (shown below).

This would need to be referenced for email campaigns sent over several months. The aim is to find email addresses for people who haven't taken any action in response to emails over a period of time rather than just the most recent campaign: 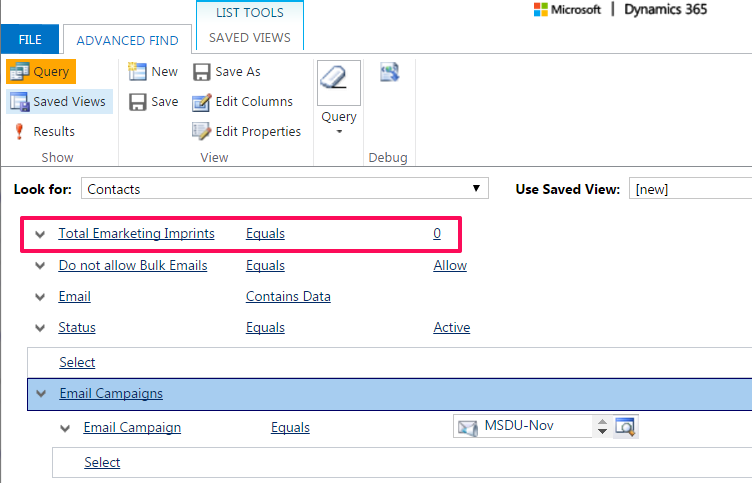 Another option to identify email addresses that should be removed from marketing lists, or at least treated as suspect, will be to query the total number of marketing emails sent.

If perhaps only 5 or fewer emails have been sent and no email imprints have been tracked this isn't an immediate cause for concern.

By contrast if 15 or more emails have been sent and no imprints have resulted this suggests that future emails would be pointless. 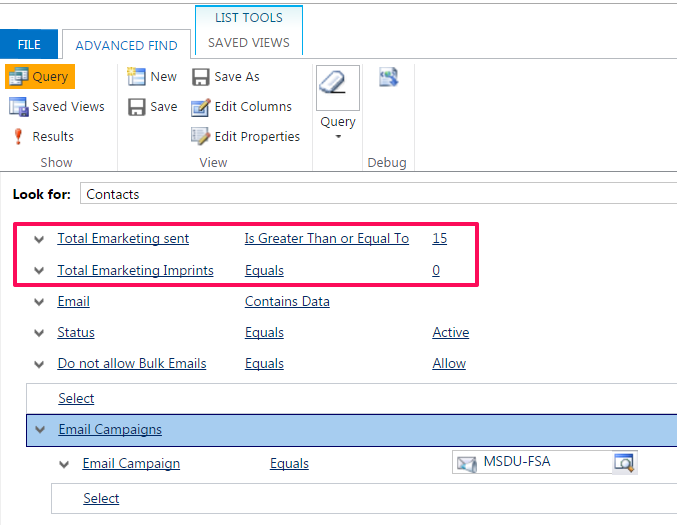 The health quality of a marketing list can be visualized using a Power BI dashboard.

In the example below, we have created a chart that segments lists based on the tracked recency of email actions:

Of the 1600+ contacts contained in this Dynamics 365 marketing list, an email open or click action within the last 3 months has been tracked for approximately one third of all members.

Further segments enable this data to be queried based on interactions within 6 months, up to 1 year and within 2 years or beyond this period.

A segment of 130 contacts / email addresses are included in this list despite no action being tracked for more than two years.

An accompanying chart has been created to grade the quality of each marketing list based on attentiveness:

In this example, the list quality is rather poor.

A core of 140 contacts are attentive based on their tracked email actions, and a similar number are broadly attentive, but the biggest segment of email addresses in this list are rated with 'infrequent' attentiveness.

The underlying rule we have set will grade infrequent attentiveness for any addresses when email imprints / actions are tracked for only 1-25% of all the emails sent.

Clicking one of these segments will filter the Recency Segmentation based on this sub-set.

In this instance, clicking the 'Infrequent' attentiveness component drills down the recency display using this criteria:

This shows more than 40% of the 'Infrequent' total (150 + 143 emails) has seen email actions within 6 months but 259 emails have seen no tracked imprints for 1 year or more years. This clearly points to data that will need to be cleansed or archived.

Additionally, there are 358 email addresses where no engagement has ever been tracked, albeit this total may reflect some individual emails that have only recently been added to the database.

Hopefully you've found this a useful example demonstrating how to quickly assess the quality of a marketing list, and use this as the basis to improve campaign metrics, control emarketing costs and progress to GDPR compliance.

Contact us if you need any advice to connect Microsoft Dynamics 365 / CRM with an email marketing service, or to develop similar reports that will help you report on the recency of email marketing actions and improve data quality.

Please complete the form to access this document. We respect privacy and your personal details will not be shared.

If you are as interested in CRM as we are, join our mailing list and you’ll receive Microsoft Dynamics 365 news, useful articles and event invitations. We respect privacy and your personal details will not be shared.

Request a Call Back

Please complete the form below and one of our CRM consultants will phone you back: